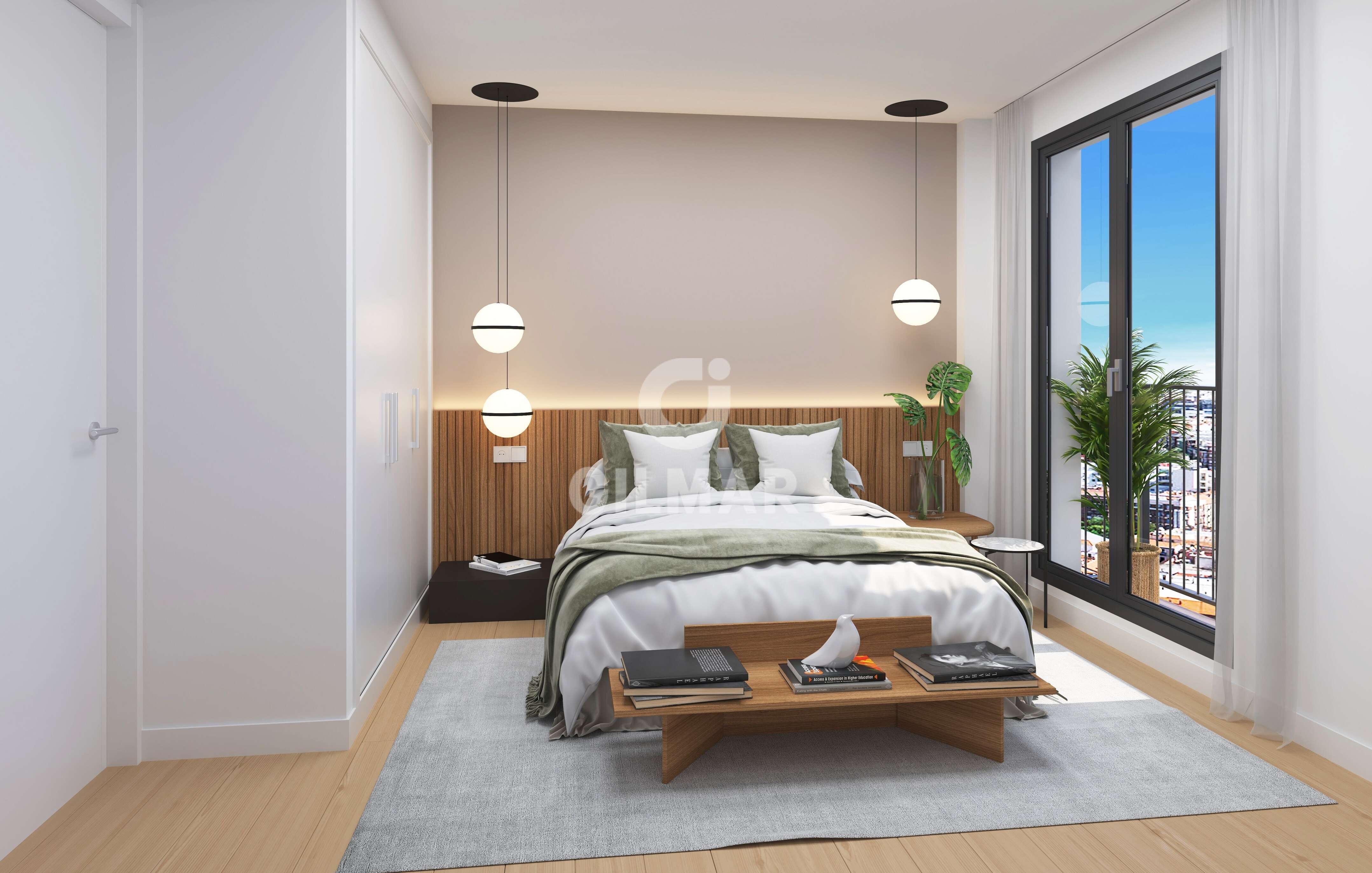 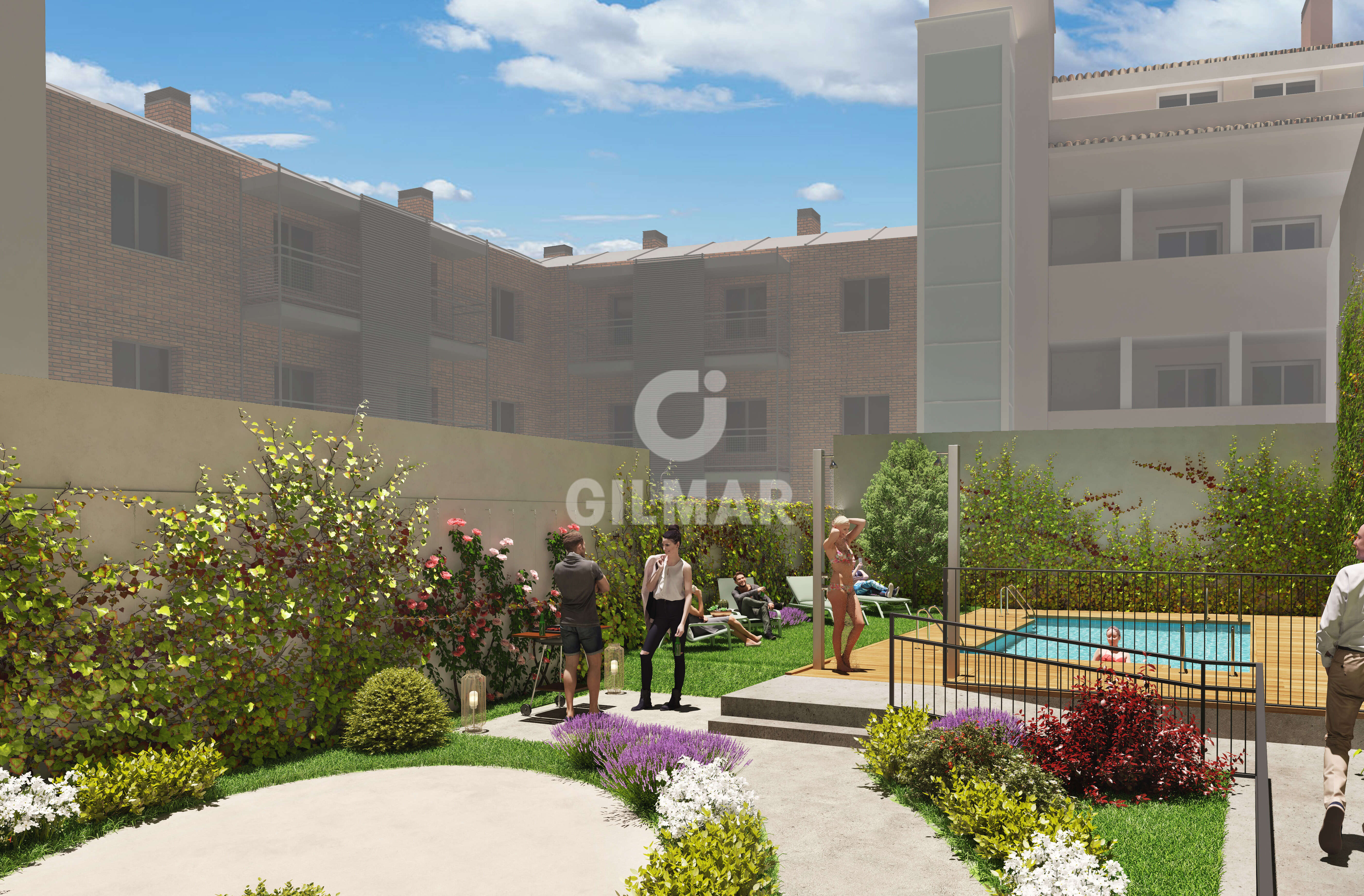 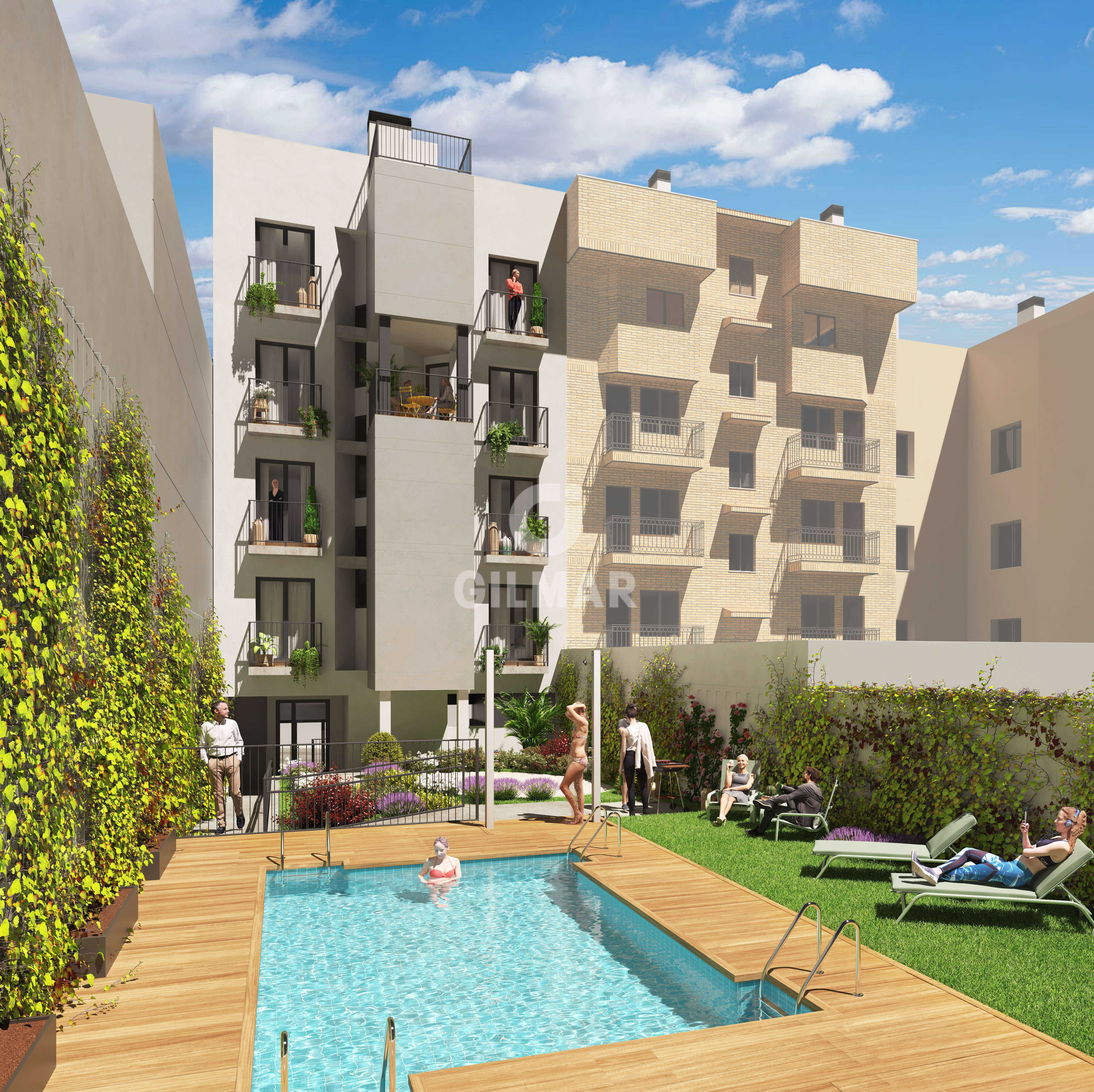 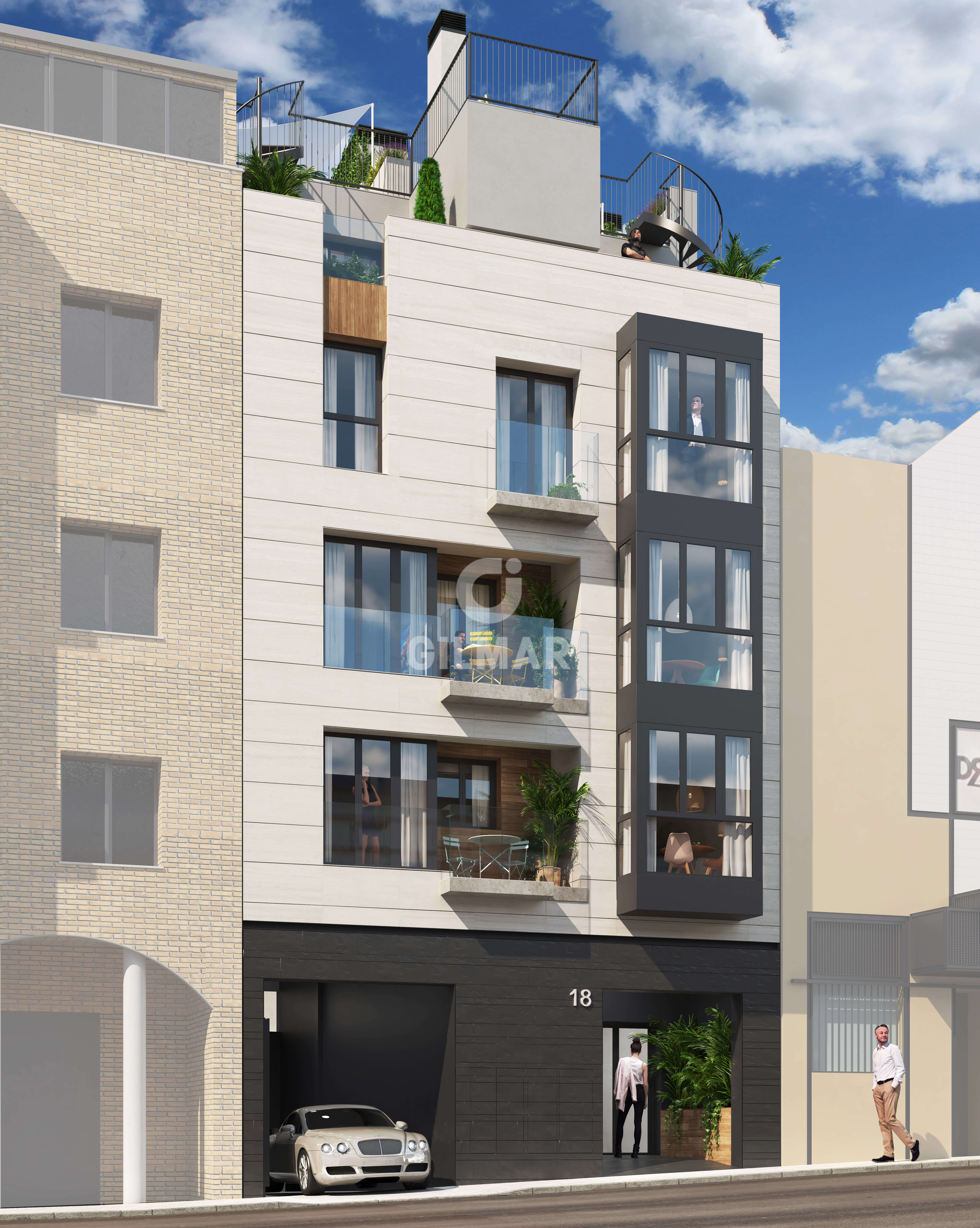 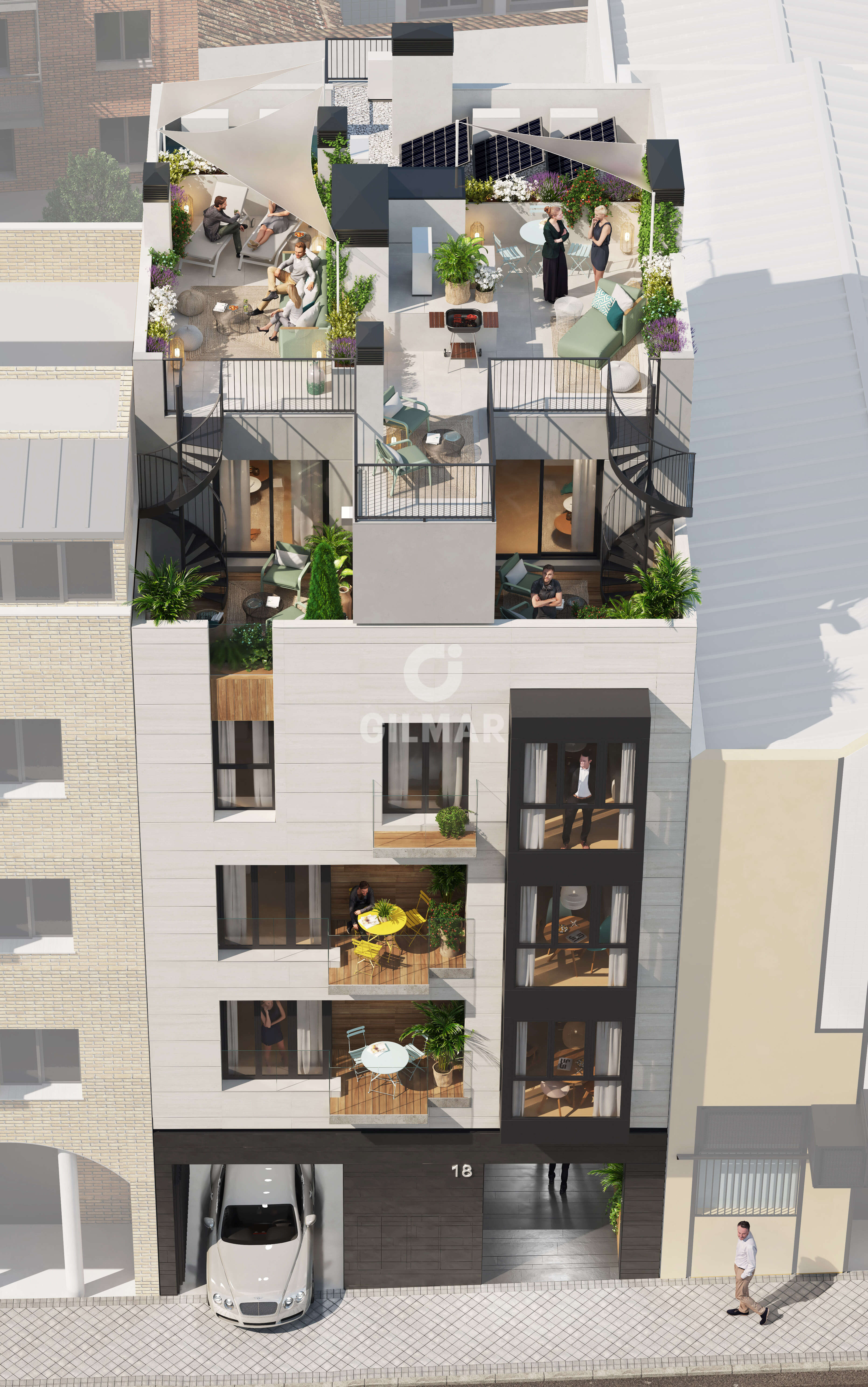 Exterior, exclusive and efficient property. It has 64 m2 distributed in a large living-dining room with open plan kitchen fully furnished with high and low furniture, integrated induction + oven, sink with taps and extractor hood. Bi-thermal sockets in washing machine and dishwasher for greater energy efficiency, with direct access to its beautiful independent terrace. One bedroom, 1 bathroom, east facing, very bright. It has a swimming pool, garage and storage room, rooftop solarium of 26 m2 for use and enjoyment of the house with access from the house itself through a spiral staircase.
Its interior distribution is with separation between dwellings by means of double galvanised steel profiles with double plasterboard on each side, separated with acoustic and thermal insulation.
Heating and domestic hot water by means of individual gas boiler with high energy efficiency. Underfloor heating installation by water pipe and digital programmable thermostat located in the living room. Greater energy efficiency of the whole system and cost savings.
Pre-installation of air conditioning in all rooms of the house and roof spaces for outdoor equipment.

The construction will be delivered between the middle and end of 2023.
State of conservation: brand new

La Guindalera (also known as Barrio de Guindalera) is a neighbourhood in Madrid belonging to the Salamanca district. It is located in the vicinity of Ventas del Espíritu Santo and is bounded by Avenida de América and the streets of Francisco Silvela, Alcalá and the M-30.
It began to be populated in the mid-19th century as a satellite neighbourhood of the expansion of the Castro Plan, with market garden settlements that took advantage of the ‘canalillo’ (eastern irrigation channel, the surplus from the Isabel II Canal). It later grew with the creation of the so-called Modern Madrid and the Ciudad Lineal de Arturo Soria. The Breogán park, next to the M-30, and the Eva Duarte park in Manuel Becerra are located on its perimeter. The etymology of the neighbourhood may come from a popular cherry orchard watered by the Abroñigal stream that ran nearby. The neighbourhood had one of the first tram lines in Madrid.
The nearest stations are Nuevos Ministerios (C-1, C-2, C-3, C-4, C-7, C-8 and C-10, Chamartín district) and Méndez Álvaro (C-1, C-5, C-7 and C-10, Arganzuela district) which can be reached on metro line 6, and Recoletos (C-1, C-2, C-7, C-8 and C-10, Recoletos district) which can be reached on line 4.
The neighbourhood is served by metro lines 2, 4, 5, 6, 7 and 9.
-Line 2 serves the south of the neighbourhood with the stations of Manuel Becerra and Ventas.
-Line 4 serves the Francisco Silvela axis, stopping at Diego de León and Avenida de América.
-Line 5 crosses the district to the south, stopping at Diego de León and Ventas.
-Line 6 is parallel to line 4, also running along Avenida de América and Diego de León, and stopping separately at Manuel Becerra.
-Line 7 serves the north and east of the district with stations at Avenida de América, Cartagena and Parque de las Avenidas.
Line 9 serves only the north-western end of the neighbourhood with Avenida de América station.
It is served by a large number of bus lines, including lines 1, 53 and 74, 43 or 48.